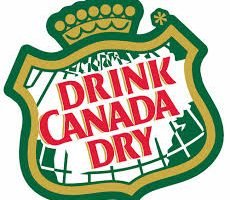 Canada Dry is a brand of soft drinks owned since 2008 by the American company Keurig Dr Pepper. For over a century, Canada Dry has been known for its ginger ale, though the company also manufactures a number of other soft drinks and mixers. Although Canada Dry originated in Canada, it is now produced in many countries around the globe, including the United States, Mexico, Colombia, Peru, Japan, and in a number of countries of the Middle East and Europe. The “Dry” in the brand’s name refers to not being sweet, as in a dry wine. When John J. McLaughlin, who first formulated “Canada Dry Pale Ginger Ale”, originally made his new soft drink, it was far less sweet than other ginger ales then available; as a result, he labelled it “dry”. In 2019, Canada Dry faced a false advertisement lawsuit from the U.S. Government. According to researchers, the drink did not have enough ginger for it have health benefits and for the company to claim that it’s “made from real ginger.” Instead of defending their ginger content by going to court, they decided settle by no longer making this claim. Dr Pepper decided to offer payment to those who purchased Canada Dry for personal use since 2013. After the settlement with the U.S. Government, a class-action lawsuit has also been requested in Canada. As of January 2019, Canada Dry still advertised their drinks as “made from real ginger” in Canada. Limited availability flavors are produced in Pennsauken Township, New Jersey, by Pepsi-Cola/National Brand Beverages and are distributed in southern New Jersey, Delaware, southeastern Pennsylvania, and eastern Maryland. At one time, the flavors all had uniquely designed labels; but now all use the standard Canada Dry crest logo.