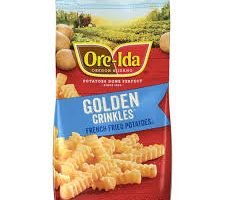 Similar Stores That May Have Coupons

Since our humble beginnings over 60 years ago. Ore-Ida has brought you the very best potato dishes in America-from crispy, golden fries to the world famous Tater Tot Potatoes, a 100% Ore-Ida invention. That’s because the best food always starts with best ingredients. And we’re lucky enough to be surrounded by the finest potato farms in the Pacific Northwest: the heart of potato growing country.  Ore-Ida’s primary production facility is located in Ontario, Oregon and the company once employed over 1,000 local residents. Currently, the company has about 650 employees. It is generally considered a leading potato brand in the American market, consistently accounting for a large amount of processed potatoes sold. In 1934, Mormon entrepreneurs F. Nephi Grigg and Golden Grigg began growing sweet corn in eastern Oregon. Their first company, Grigg Brothers, became the largest distributor of sweet corn in the United States. In 1949, with financial backing from their brother-in-law Otis Williams, the brothers rented a frozen food plant located in Ontario, at the border with Idaho, and converted it into potato-processing facility. The three purchased the facility around 1952 after the plant went into foreclosure. The company was officially founded that year as the Oregon Frozen Foods Company. The company initially produced and sold frozen corn and French fries. In 1953, Nephi, Golden, and Otis developed Tater Tots, bite-sized “logs” formed from seasoned slivers of potatoes, which were leftovers from French fry production. Tater Tots are today considered the brand’s most well known product. Ore-Ida’s foodservice division in 1997, acquiring five of the company’s plants, including the Burley location.Ore-Ida’s division headquarters were located in Boie until 1999, when a new frozen foods division was created based at Heinz’s corporate headquarters in Pittsburgh, Pennsylvania.