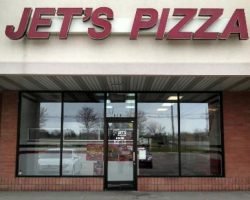 Sign Up For E-Club And Save
Online: Join Jets E-club For Special Coupons and Offers.

Looking for a better house, he found a better pizza. In 1978, Jets pizza founder Eugene Jetts was about to buy a new home. The first Jet’s Pizza was opened in 1978 by brothers Eugene and John Jetts in Sterling Heights, Michigan. The original location was converted from a vacant party store into a restaurant. The Jetts later opened more locations and formed Jet’s America Inc. with their cousins, Jim Galloway, Jr. and Jeff Galloway in 1992. The first franchise location was opened in 1990. As of 2017, Jet’s Pizza had 312 franchises and 24 company-owned locations in 20 states. It has restaurants located in Alabama, Arizona, Colorado, Florida, Georgia, Illinois, Indiana, Kentucky, Michigan, Minnesota, Missouri, New York, North Carolina, Ohio, Pennsylvania, South Carolina, Tennessee, Texas, Virginia, and Wisconsin. Jet’s is known for its square deep-dish Detroit-style pizza, including the 8-corner pizza which the company has trademarked.When the store first opened, the square pizzas were a novelty in the region. The original recipe came from the Jetts’ mother and has not changed since 1978. From small gatherings at home to big office parties, we have a variety of delicious food to choose from – delivered fresh and made right in our kitchens each and every day. With Jet’s you can create any number of combinations to fit your needs. How did they do it? From the very beginning, their sole focus was on quality ingredients. To this day, Jet’s stands for the freshest vine-ripened tomatoes, Italian herbs and spices, dough prepared by hand each day, and hand-grated, premium mozzarella cheese. Of course, a few things have changed. That first location has grown to more than 400 in 20 states. And Jet’s offers more than famous deep dish pizza, like delicious fresh salads, breads, a dessert, hand tossed and thin crust pizza, a gluten-free option and one-of-a-kind Jetzee sandwiches. One thing that will never change is their commitment to quality ingredients. Now just imagine if Eugene had bought that house almost 40 years ago. Millions of happy customers would never have said, “Let’s get Jet’s! ” It all worked out pretty tasty for everybody. Each of our stores is independently owned and operated, so you will need to apply directly at the store where you would like to work.